My sweet J was born February 28, 2010. He loves trucks, dirt, bugs, and playing outside. He tries to repeat everything you say and always picks up after himself ( and the rest of us...which is how my shoes ended up in the trash can!) From day one, he was the easiest baby. He would lay down awake and go right to sleep every night. He loves his big brother and loved to copy everything L  does. As a baby, he seemed a lot more calm than his older brother and loved to snuggle, especially with Mommy. 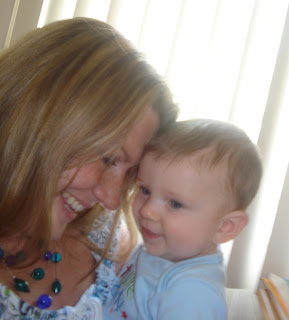 I think he started sensing that his world was about to change when I was about 6 months pregnant with E. At 18 months old, he could climb on every surface in our home. And he did. He started his "terrible two's" a little early. He was still a sweet little snuggle bug but if you told him "NO", watch out. Temper tantrum city! This was new for me since, although he was very active,  L rarely threw temper tantrums. J was into everything and made messes that made my pregnant self cry just about daily. 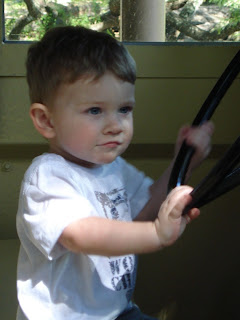 I blame my pregnancy hormones but I was genuinely worried about J getting enough attention when his little sister came. Mostly because he was so young and I couldn't really explain anything to him like I did with L when he was born. I also worried because he was so dependent on me and wanted me to hold him all the time. And I guess I felt bad that he would always be the "middle child." I expected some adjusting but  knew that he would be fine and that he comes from a very loving family who would give him lots of Jesus,  kisses and snuggles. 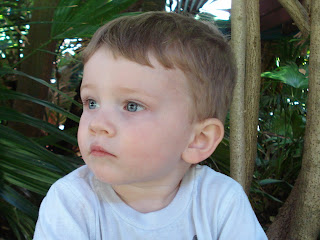 What I didn't expect was that he would not want anything to do with ME when I came home from the hospital. It took him 3 horrible days to let me even hold him. He wouldn't come near me and if I tried to touch him he would kick and scream. At least he was very good to the baby. When he finally let me hug him on that third day, I held him and cried and cried. ( I blame hormones again!) 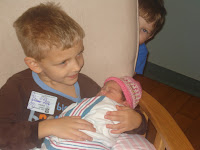 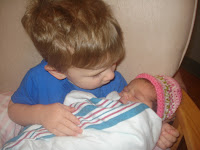 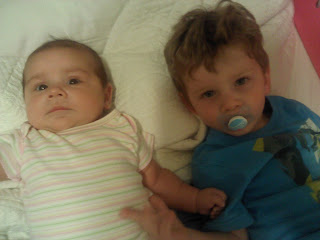 He has tried out all of her equipment. 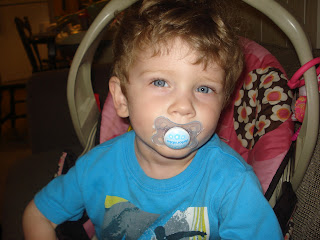 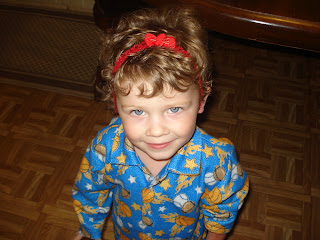 And although he never took a pacifier when he was a baby, he steals hers. He used to suck on his two middle fingers instead of the paci.  I took it from him at first but then he resorted to sucking and biting on his arms. His arms looked horrifying so I gave him back the paci. 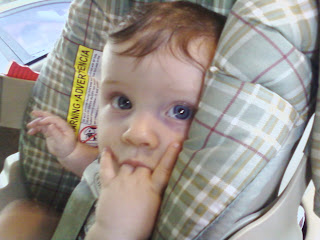 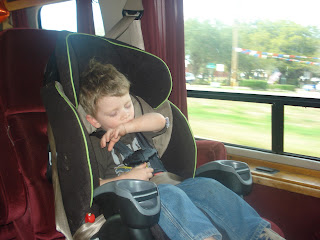 I let him help me with the baby. His favorite job is to pour the warm water on her when I am giving her a bath. He also loves to get me her diapers and anything that I can ask him to get. If L tries to get something I asked him to get, he throws a fit!  I hold, tickle, kiss,hug and sing to him. I tell him he's my big boy and my baby boy. I tell him all the things he gets to do that baby can't do like eat yummy food, play on the swings, chase Daddy and L, swim with arm floats and read stories with Mommy. 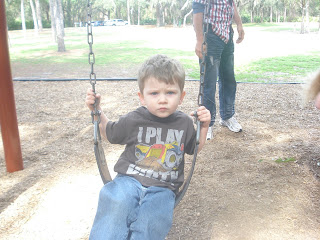 God gave him a true gift when HE gave J a baby sister. The three of them will always have each-other and will someday be best friends. ( well at least when they are adults I hope) right now, He needs lots of extra love and consistency, but I think he'll be just fine! I love my baby boy! 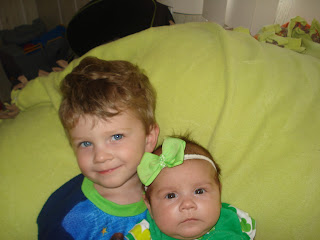 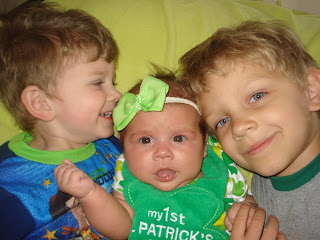 Posted by amyluvsjoey at 7:09 PM